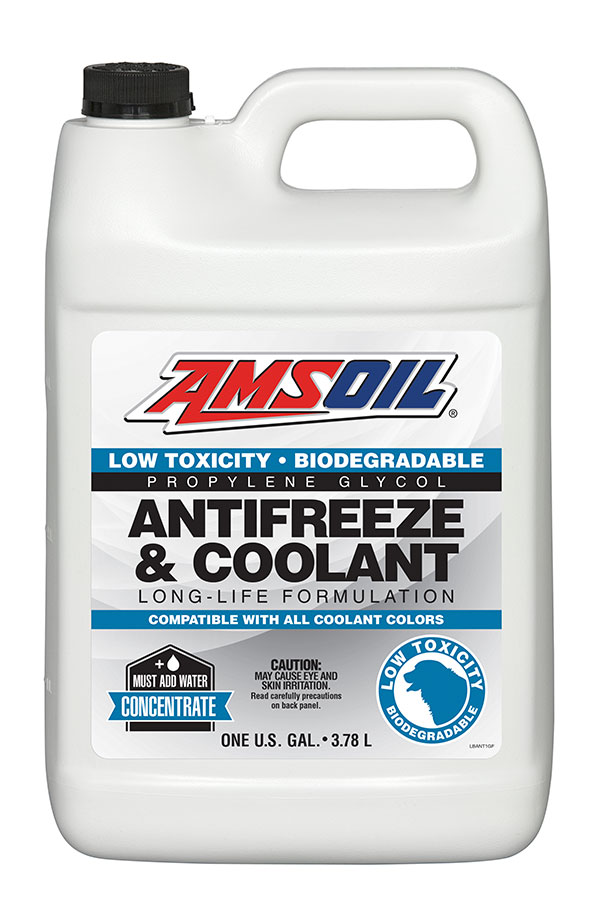 AMSOIL Antifreeze & Coolant (ANT) is formulated to provide benefits far beyond those found in today’s conventional antifreeze and coolant products. This revolutionary formulation provides maximum antifreeze and cooling protection in the most extreme temperatures and operating conditions. And unlike conventional ethylene glycol-based products, which are highly toxic and even fatal, AMSOIL Antifreeze & Coolant is formulated with propylene glycol. It is biodegradable and requires no special disposal costs or procedures in most areas. Above all, its low toxicity limits the threat to children, pets or wildlife.

Compatible With Other Fluids
AMSOIL Antifreeze & Coolant is dyed neutral yellow and is compatible with all ethylene and propylene antifreeze and coolant formulations on the market, including DEX-Cool®, Sierra® and Zerex®. It is also compatible with fully formulated diesel anti-freezes and other organic acid technology (OAT) and hybrid organic acid technology (HOAT) formulations.

Standards for iron, steel, copper and brass allow a maximum loss of less than 20 mg. AMSOIL Antifreeze & Engine Coolant never exceeded a 3 mg loss in any of those metals in a testing period that was run for 10 weeks, three weeks longer than required tests.

• Good for motorcycles, ATVs, snowmobiles and some marine applications