Back to: Fuel Additives 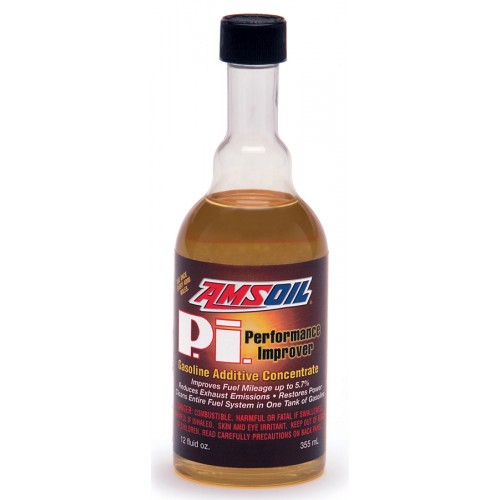 Untreated Fuel Leads to Poor Engine PerformanceA vehicle demonstrates its best efficiency and engine performance when it is new. As the engine ages, its performance suffers from gasoline fuel-generated deposits that form on the fuel injectors, intake valves and combustion chamber. Additives are required to control deposit formation.

AMSOIL P.i. works as an emissions passer. It is ideal for use prior to emissions inspections.

Unsurpassed Deposit Clean-upPort Fuel Injector Deposits form after the engine has been shut down and there is no gasoline flowing through the injectors. During this hot soak period the injectors heat up and the gasoline remaining in the injectors degrades and forms deposits. This can happen very quickly with the use of poor quality gasoline and short trip driving. Because the clearances within the injectors are extremely tight and injectors must deliver precise amounts of atomized fuel, even small amounts of deposits can cause injectors to malfunction. Fuel flow is reduced and spray patterns are disrupted, decreasing engine efficiency, power and fuel economy, while increasing exhaust emissions.

Intake Valve Deposits form on the intake side or back side of the valves. As deposits increase, they restrict airflow and alter airflow patterns in the cylinder. The deposits disrupt the balanced air/fuel ratio by momentarily absorbing and releasing fuel, and they can cause valve sticking by getting in the way of the valve stem and guide. Deposits also restrict proper seating, and the valves may be burned. Intake valve deposits cause lost engine power, increased emissions, poor engine efficiency and potential valve failure.

Higher compression and stored heat cause increased intake fresh charge temperatures and the increased likelihood of pre-ignition knock or pinging when the fuel spontaneously combusts prior to spark ignition. This increases emissions and may cause engine damage. Many of today’s cars have knock sensors that adjust spark timing to prevent knock.

RecommendationsTreat one full tank of gas up to 20 gallons with one bottle of P.i. For very large gas tanks, partially fill to 40 gallons and treat with two bottles of P.i. Using more than two bottles per treatment is not recommended. Treat gas every 4,000 miles of service (or 100 hours for marine, stationary and off-road gasoline-powered engines). P.i. helps pass emission tests by running one tank of treated fuel through the engine prior to testing. Safe for use with catalytic converters, oxygen sensors, oxygenated gas and 10 percent ethanol blended gas. Not recommended for two-cycle engines.

DANGER: Combustible. Harmful or fatal if swallowed. Harmful if inhaled. Skin and eye irritant. Read precautions on container before use.