Back to: Gear Lubricants 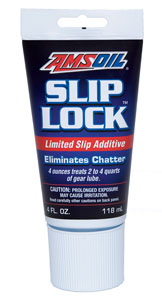 When making a turn, the outer wheels of a vehicle must travel faster than the inner wheels. It is up to the differential to act as a balance arm, establishing constant equilibrium of torques and forces between the left-hand and right-hand driven wheels. In standard (or open) differentials, power is directed to the wheel offering the least resistance. This works well when making a turn, but in a situation where one wheel is lifted off the ground, it causes the suspended wheel to turn while the other remains motionless.

AMSOIL Slip Lock Differential Additive is formulated for use with both synthetic and petroleum gear lubricants and safely replaces manufacturer recommended friction modifiers. Its convenient flip-top dispenser provides quick and easy application to the gear housing. One four-ounce bottle of Slip Lock treats differential capacities of two to four quarts. It is not for use in automatic transmissions or other applications requiring ATF.

NOTE: AMSOIL Synthetic Gear Lubes do not require the use of this additive. However, not all differentials respond the same and if chatter is noticed, the addition of AMSOIL Slip Lock will eliminate it. For chattering differentials not running AMSOIL Gear Lube, this product is an excellent solution to the problem.